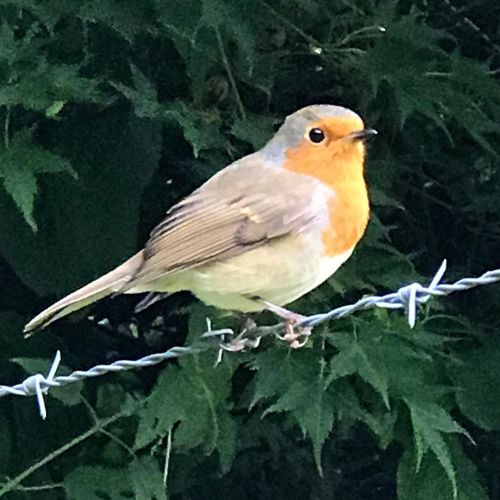 Brazen curiosity! Just love it when a tiny little creature steps up real close and looks you straight in the eye. Totally magical making you feel supremely connected to nature. So calming too. A fearless and very inquisitive little bod who watched my every move whilst I was cutting thistle flowers. I very nearly bumped into him a couple of times as he flew to some grub he’d spotted right next to me. For the half hour I was snipping thistles he remained within a few feet of me, many times just a few inches. He even hovered like a hummingbird a couple of times, above the big bucket I was carrying to check its contents for any tasty treats. I felt obliged to hold it out for him while he inspected it. It was like he expected me to provide him with his supper. I also felt obliged to pull up a few nettles to see if I could uncover a few grubs and bugs for him. He watched my movements avidly and took a nano second to jump on something I’d uncovered. As is typical my phone battery was flat so this is the best shot I could get of him as he sat on the fence chirruping at me. I have a feeling that the next time I go down the garden he will more than likely show up again. Another magical moment recently was watching a trio of treecreepers playing tag as they flew round and round the big walnut tree in the garden. It is such encounters, the tiny moments that bring so much joy. We are so lucky to live on such an awesome planet where there is so much to experience. #gratitude #magicofnature #robin #treecreeper #wildlifegarden https://www.instagram.com/p/CCwUQNypbOS/?igshid=1dmce3hx3j1b1